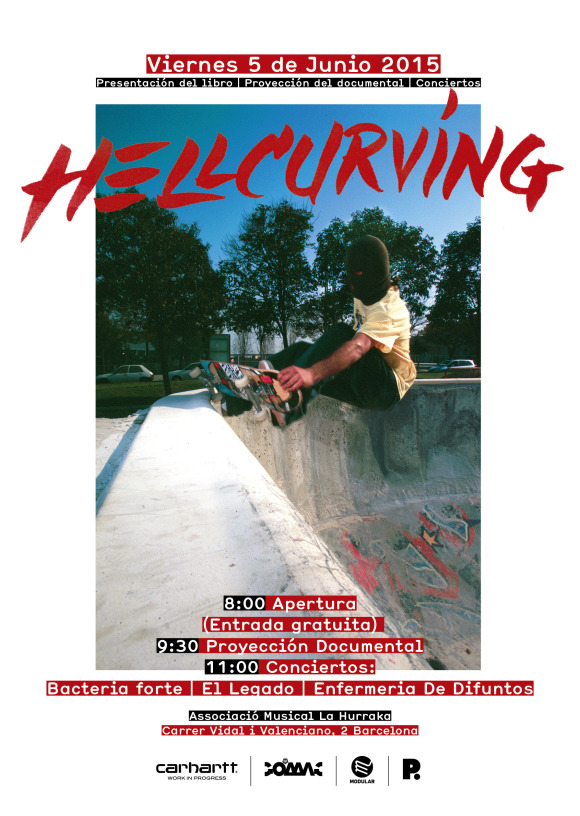 From how Jose Noro, Dani Santos and crew came up with the idea for the skatepark, to its construction, through to the endless sessions and parties, this is the story of how a group of friends got together to change things and ended up creating one of Barcelona's quintessential spots.

In addition to the book you can see the “Hell Curving” video documentary by Modularestudio on the GO Skateboarding and Carhartt WIP website.

This independent magazine was born 5 years ago in Madrid and is dedicated 100% to the Spanish skateboard scene.

"Everyone at GO SKATEBOARDING MAG knows photography, art, journalism, design, and most importantly skateboarding, for more than two decades. Our obligation as skaters is to give back to skateboarding what it has given to us, and GO MAG is our small offering."

The magazine is free and is released every three months in over 100 shops throughout Spain. You can also find it at www.go-skateboarding.com.

Modularestudio is an audiovisual studio founded in 2008 by David Triviño and Pedro Márquez, who both produce and direct videoclips, spots and cinematographic projects.

Their work, perhaps due to its intense sense of rhythm and constant exploration into new paths of audiovisual language have already garnered more than three dozen prizes both in Spain and overseas.

Their pieces for Fira Fem, Elphomega, Modo Bélica and El Puchero as well as fictional and animated publicity jobs for some of the most prestigious Spanish agencies has made Modularestudio one of the most promising audiovisual studios in Spain. They are currently based in Malaga, their hometown.